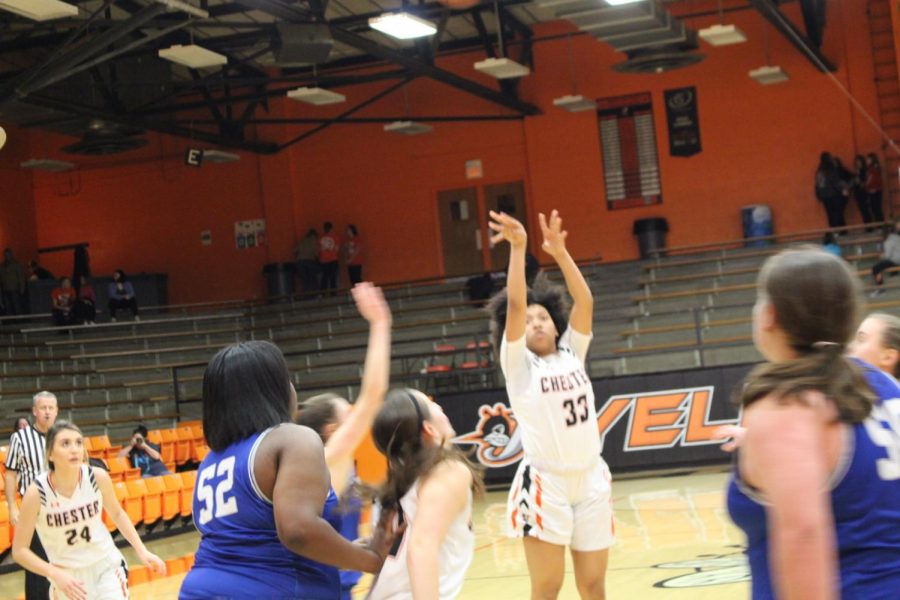 Destiny Williams was MVP of the Carbondale Mid-Winter Classic.

Editor’s note: The following essay was written for an assignment by the dual-credit Rhetoric & Composition classes in which students researched and found symbolism in an artifact connected to the group they are studying for an ethnography.

At a basketball game, the one thing the crowd is concerned about, just as in any other sport, is being entertained. What people fail to acknowledge is the one object that holds the game together, the basketball. The sport of basketball would not be the way it is without the purpose of the ball itself. Although it may seem obvious, scoring the basketball is a major component of the game. Considering that the overall structure of the basketball has improved since early history, I feel the need to stress the importance of the role basketball has played in society for over a century. Underneath the clear-cut uses of the basketball, I also feel that revealing the symbolism the ball obtains is necessary in regards to the overall relationship within a basketball team.
The significance of the basketball first starts with the fact that the sport began with a soccer ball. Three years after inventing the sport, James Naismith contacted A.G. Spalding & Bros. to create a product that would properly fit the objective of the sport. The first basketballs were a rusty brown color; they did not get their burnt orange color until the 1950s (“Basketball Equipment”). The makeup of the first basketball consisted of leather and lace seams. The overall circumference of the ball also underwent an increase of thirty-two inches, specifically four inches greater than that of the soccer ball. However, in the late 1940s, the model was again reconstructed and by 1949, the official structure discontinued the laces and even reduced the circumference to thirty inches. Still, this was not the end of the ball’s alterations. Rather than displaying four segments of leather, the basketball introduced eight segments, a design for which the NBA agreed upon in 1970. Although the NBA later made Spalding’s leather ball the official ball, variations of rubber were also introduced as the covers of basketballs. The development of basketballs also allowed for the assortment of specialized balls, like indoor and outdoor basketballs, as well as basketballs for beginning children (Gargulinski). Progress in production led to other improvements on the types of products that had been released.
Since the development of the basketball, advancements have still been conducted on the product, like dimples for better grip and outer covers for sweat absorption. Spalding went on a run of improvements. Not only was the company responsible for creating the official, orange and white WNBA ball, but it also developed a ball with a built-in micropump for instant inflation and a new depiction of the official NBA ball with the intentions of better quality. Rather than the usual leather, Spalding chose to introduce a cover made of a microfiber composite (Gargulinski). However, the company returned back to the leather covers within a few months due to injury caused by the material (Roth). Although an advancement in material sounded better at the moment, it left the NBA unhappy in the end.
Among the literal attributes of the basketball, many symbolic characteristics describe the structure of the ball as well. Stating the obvious, I vision the basketball as unity, or one. Considering that five players from each team can be on the court at a time, the ball, being singular, is the one item that represents the glue holding each team together. Sharing the ball not only reveals trust within a team, but it incorporates everyone, allowing players to improve individually. Teams that value the ball, or unity, demonstrate better team chemistry.
Another general attribute that a basketball obtains is a burnt orange color. According to an article from Color Psychology, “Burnt orange is the color of aggression, pride, and tension” (Przybyla). These characteristics relate to the attitude of a basketball player, full of fire and passion. I also associate burnt orange with competitive and motivated energy. When I picture burnt orange, communication is another key trait that sticks out. Communication is a major part of basketball that many times gets shoved under the rug, especially in regards to defense. Whether it means calling out a screen that is coming or simply calling for help on defense, when everyone talks, everyone, including the crowd, stays engaged and locked in.
The lines that divide the surface of a basketball are referred to as the ribs. They are fixed deep into the material and act as the seams that hold the ball together. The deep engraving represents digging in deep as a basketball player and playing every game like it is the last. I also think the lines symbolize playing from the heart. When I am holding a basketball, sometimes I tend to grip the lines of the ball and reminisce about the struggles I have overcome to get to the position I am in now. Those who value the game of basketball understand that no matter what personal experiences one has encountered, playing from deep within is something nobody can shut down.
Another characteristic the basketball possesses is the ability to bounce. I feel that it is important to view this as a life lesson. Every athlete at some point in his or her life has encountered a moment in which it feels as if he or she has failed themself. One thing that separates an athlete from the rest is willingness to bounce back from failure, just as the basketball bounces back up from the floor. Bouncing back does not come easy; doing so takes pride and mental toughness.
Personally, when I see a basketball, I see a family. I feel an unconditional love for the game. Despite the adversity I have faced, basketball has always challenged me to be the best version of myself. Basketball is the one I call on in my weakest moments. It is also something I look forward to on my best days. Basketball will always hold a place in my heart, as if it were my blood sister. When I look at a basketball, I see more than the material that it is; I see everything that such a simple object has taught me.