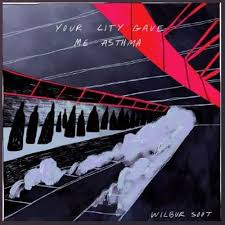 Wilbur Soot is known for his YouTube and Twitch content and his other songs such as “Your New Boyfriend” and “Your City Gave Me Asthma,” which was released June 25 The entire album has an acoustic guitar, drums, and a British vocalist, that being Wilbur Soot, with the help of friends as back-up vocals. The album is free to listen to on YouTube, Pandora, Spotify, and most other music platforms. I will be going over three favorite songs on the album, in album order, starting with “Jubilee Line.” I also will be saying what place each song is in my personal tier during each analysis, but I highly recommend you listen to the album before reading this; and don’t forget to comment anything you want to add!

Jubilee Line | 0:00 – 3:05: I will say, this is my fourth favorite song on the album. The song begins with a British woman announcing stops or the train arriving, putting me already in an underground subway station in London and a gray metallic sensation. The first verse sets the premise of some conflict with, “Wasting your time, you’re wasting mine. I hate to see you leaving, a fate worse than dying.” It seems we are put in a situation of two individuals who had a falling out and Wilbur is conflicted. He must have a strong connection with said person in the song, but knows it’s a waste to continue whatever relationship they had. This is followed up with “Your city gave me asthma, so that’s why I’m leaving and your water gave me cancer, and the pavement hurt my feelings,” telling me that he is deciding to leave because he found how toxic their world they built has become. Verse three pursues this with, “Shout at the wall, cause the walls don’t love you”; the verse is then repeated. His voice during this bit was tragic, as though he was shouting this at the person. He feels that the person verbally abuses those who care about her because the person doesn’t deserve to be loved (more on that in the next verse). This also could be taken as a song from the person’s perspective. In “Your Sister Was Right,” he laments that he hurts those he loves and hurts those who love him. The last verse of this song is yelled, “There’s a reason, that London puts barriers on the tubeline / There’s a reason, that London puts barriers on the rails (repeated) /There’s a reason they fail.” What Wilbur is trying to say here is that he or the person he is singing for is telling him there is so much that they can do. He can’t, or the person can’t, stop her from being who she is or what she will do, just like how London can’t stop the train when someone decides to jump in front of it.

Since I Saw Vienna | 6:24 -8:50: From livestreams, this album is about his first ex-girlfriend, so when I hear “Since I Saw Vienna,” the whole song sounds so nostalgic, like visiting an old childhood clubhouse. The first verse, “The cute bomber jacket you’ve had since sixth form adorned with patches of places you’ve been is nothing on my khaki coat I got from a roadside when I was sixteen,” tells me how the girl he’s talking about traveled and had an overall fulfilling life, while Wilbur kept the jacket with nothing on. What’s the difference between their coats? The bomber jacket is packed with items relating to places and shows her personality with it, while Wilbur’s is a plain sentimental jacket with nothing on. Both jackets are worn and old, but unlike Wilbur, she took the jacket and moved on to new places while he is stuck in the jacket because nothing has changed. In this verse, “My boots are from airports, my backpack’s from friends / I’m not a man of substance and so I’ll pretend to be a wanderer, wandering, leaving ascetic belongings in hostels and restaurant bins.” He talks about how he cares little for self-indulgent items. This also could be referring to letting go of a certain addiction due to the word he used, which means “severe self-discipline and avoidance of all forms of indulgence.” “The roads are my home/The horizon’s my target / If I keep on moving, never lose sight of it / Treating my memory of you like a fire, let it burn out, don’t fight it and try to move on” describes him trying to move on from this broken relationship and how he’s striving to keep going forward, towards the horizon if you will. He feels like he needs to keep moving forward to forget. “It’s been sixty weeks since I saw Vienna / A bandage and a wide smile slapped across my face / I’ll pick up my hiking boots when I am ready and I’ll put down my roots when I’m dead” refers to the fact he is still hurting and not ready to leave wherever he is. He’s taking his time for the first time in this song, actually going through the emotions of loss instead of pushing past them. In the song, he says “I’ll pick up my hiking boots when I am ready” in a defiant voice, taking charge instead of letting the horizon take him random places with no meaning. “The distance is futile / Come on, don’t be hasty you’ll get that feeling deep inside your bones / I’ll be gone then, when you, must be, alone” reasons that no matter how far he goes, no matter how many Viennas or Londons there are, he can’t rely on a place to fix his hurting. Then, when he says “I’ll be gone then, when you, must be, alone,” he’s saying that she too will forget the hurt once she learns to accept and move on. Out of the entire album, this one is my second favorite. The guitar, the slow pace, and the way it moved me, reminded me of a person as well; absolutely my top 20 of 2020.

Your Sister Was Right | 12:52 – 15:24: If it weren’t for “Jubilee Line,” this song would be crowned most popular song on this album. This song begins with a repeated guitar rift followed by “I thought I couldn’t love anymore / Turns out I can’t, not for the same reasons as before /
I use everyone I ever meet, I can’t find the perfect match / Abused the ones I love, while I ostracized the ones who loved me back.” Already this song’s message is clear. He says he couldn’t love anymore, yet he admits he abuses those he claims to love. This is him coming to terms with his actions over this breakup and him lamenting over how he doesn’t deserve the things given to him, such as love. “On  the path of least resistance I find myself salting the earth / Every time that I miss you, I feel the way you hurt / And  I don’t deserve you, you deserve the world / Though it feels like we were built from the same dirt.” He talks about how he is drawn to roam the earth, getting away from the pain he caused her. He travels because if he stops and thinks about her, he feels her pain. He knows he’s in the wrong, but he understands that both of them weren’t good for each other, being so similar it hurt both of them badly. The chorus follows, after a long instrumental break, with “Oh, I hate to say it but your sister was right / Don’t trust English boys with far too much free time / I hate to say it but your sister was right / I’m nothing but a problem, leave you crying overnight / And I hate to say it but your sister was right / I can’t focus on the future, only my short sight.” This is a combination of what the sister has said about him turning into what he thinks about himself. The last verse, “I hate to say it but your sister was right / I’m an idiot, complete idiot / An utter waste of time.” This is him self-loathing and taking full responsibility for the breakup. This really resonates with me, and I’m sure it will resonate with you. This is one of my guilty pleasures and my favorite from the album by far.

The Album in total is a 7/10. There is room for improvement in any album, but minor things such as extended instrumentals in a few of his songs made it redundant for me. This album is a really good listen despite its flaws, but all albums have flaws.